Following on from last time, let’s take a look at some of the non-critical errors NDepend 6 told me about on my project. There were 29 rules violated, and 712 total violations - sounds like a lot but there’s 274 rules being checked in this version, so I’ve broken about 10.5% of them.

Rule violations are viewed in the Queries and Rules Explorer, which looks like this:

Every category with a warning symbol in the pane on the left has one or more violated rules. In the Object Oriented Design category, I’ve violated rules relating to sealing classes, leaving stateless classes and methods non-static, and using Singletons.

Clicking the query title displays a window with more information about my 62 unsealed classes:

The first pane contains the query used to check the rule, a description of why the rule exists, and how to fix violations; the second pane lists offending classes. It’s important to keep in mind that all NDepend does is offer recommendations - it’s a tool, not Gandalf. Especially with non-critical rules, you have to decide for yourself how serious the problems it finds are. You can do that by reviewing the explanation for a rule, and deciding if:

In this case, the description mentions a slight performance gain (of which there is at least some doubt), but emphasises that sealing a class expresses the intention that it shouldn’t be used as a base type. The thing is, nearly all the classes listed are internal, and I’m the only developer on the project, so I have to ask myself - expresses that intention to whom? I think in this case I’ll ignore this rule, which I can do by deselecting it in the Queries and Rules Explorer.

Another highly-violated category is Naming Conventions:

…but as I don’t prefix instance fields with ‘m_’ or static fields with ‘s_’, these don’t apply. Fortunately, the rules are easy to modify:

As ‘m_’ and ‘s_’ aren’t the Visual Studio or ReSharper defaults - nor a commonly-used convention as far as I know - it strikes me as a curious default rule. Never mind - just a minor quibble and easy to change.

A good-size chunk of the other non-critical errors relate to method visibility:

Both rules - ‘Methods that could have a lower visibility’ and ‘Avoid public methods not publically visible’ - have picked out a large number of public methods in internal classes, on the basis that the method could be made internal to match the class. The description of the second rule acknowledges disagreement as to whether this is good practice, which I’m not personally convinced it is. I therefore switched off the second rule and amended the first one to ignore public methods in internal or private classes.

The .NET Framework Usage > System category contains a rule violation because my assembly has no ComVisible attribute, but the project is a PCL and its set of targets means the ComVisible attribute isn’t available, so that’s another one to switch off.

I’m conscious that so far I’ve just been saying ‘so I ignored that’ over and over again, but I did use the results to make several updates (here’s the commit to prove it) around:

Re-running the analysis gives me this dashboard: 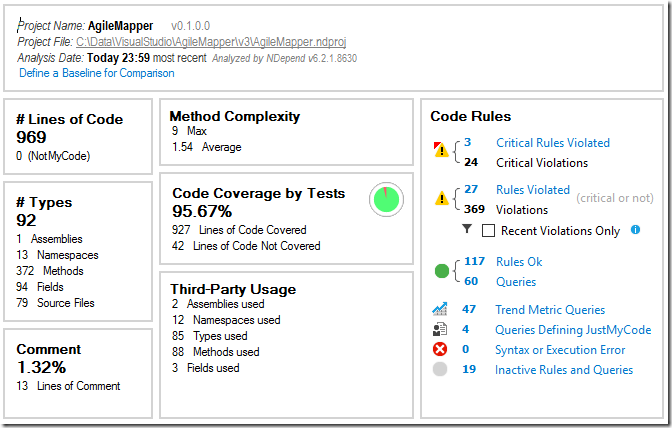