Unless every project you’ve worked on has been green field and / or built with no time pressure, you’ll have found yourself working on a legacy project at some point. Unwieldy methods, mystery sections of code, ancient technologies, wholesale duplication… it’s not much fun, but it’s a large percentage of the code that’s out there.

Projects to replace or rewrite these systems are commonplace, but where do you begin? What if you want to make a case to the business that such a system needs to be replaced? Technical debt can be a useful metaphor to make that case, but while it’s easy to explain in the abstract, it’s difficult to come up with anything concrete to justify the expense of an update to someone with an eye on the bottom line.

Thankfully, the folks at NDepend have now built technical debt computation on top of their code analysis tools, giving you a much easier way to have these sorts of discussions. This is doubly powerful - as well as putting a concrete cost on choosing not to refactor, the data it presents has the authority of having been produced by a tool. Tools don’t try to get nice, tidy-up projects for academic reasons - they impartially detect problems in code. Someone (I think Erik Deitrich, but I can’t find the blog) recently pointed out the advantages of an automated critique of this sort - there’s no politics or personal opinions involved, and that automatically means everyone takes it more seriously.

I’m currently working with a legacy project, so when I heard about NDepend’s new technical debt capabilities, I was eager to fire it up and see what it said. With all the default settings, it said this! 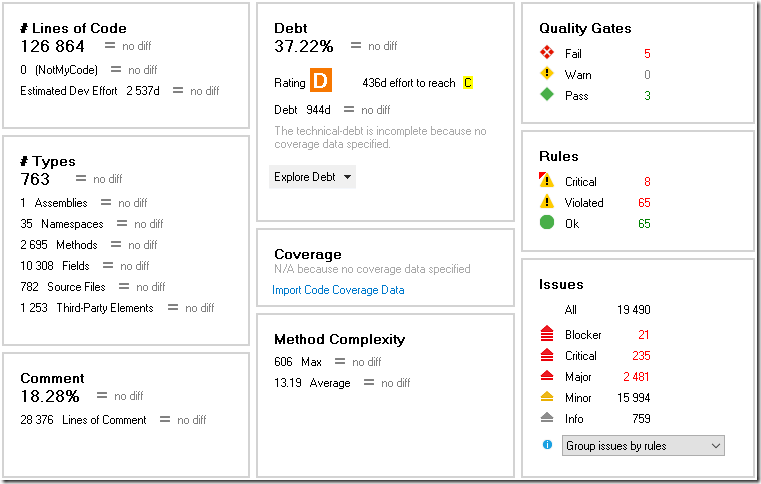 The main takeaways are:

These numbers make a powerful financial argument for refactoring and cleaning up the code. Which is exactly what we’re doing :)

But there’s more - Debt and Issues

As usual with NDepend, you can explore the issues it finds in great detail. Selecting from the Explore debt menu: 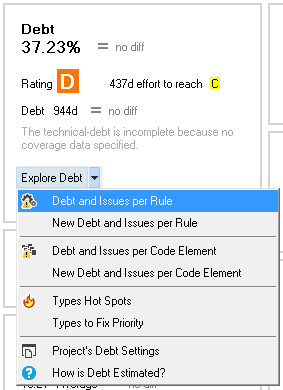 …you can check out Debt and Issues on a rule-by-rule basis: 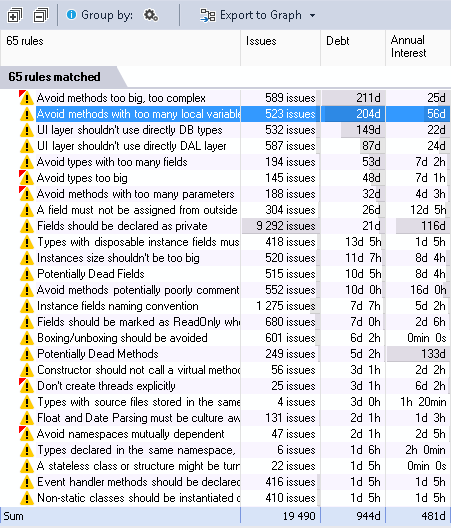 The main offenders here are the aforementioned unwieldy methods and direct use of data access code in the UI layer. You see the debt and annual interest here on a per-rule basis, with the annual interest sum in the bottom row.

You can click into a particular rule to see more details, as well as the query used to calculate the debt and interest. For the ‘Methods too complex’ rule, that looks like this:

Debt is calculated directly from the Cyclomatic Complexity measurement - the number of paths through the method. Interest is calculated as 10 minutes per year if the method is 100% covered by tests, and 2 hours per year otherwise. Again as usual with NDepend, if you think these numbers don’t sound quite right, or you’d like a method’s complexity to be taken into account when calculating its annual interest, you can tweak the query yourself until you’re happy with it - it’s just C# Linq in Visual Studio!

The dashboard indicated violation of 8 critical rules - clicking that opens the Queries and Rules Explorer:

Our 8 violated rules are listed in the right-hand pane - again, mainly down to unwieldy methods. Clicking into each rule presents the list of offenders with direct access to the code.

Static analysis has always been a very useful tool, but linking it to technical debt is one of those simple, brilliant ideas - bringing issues into the real world, especially for non-technical stakeholders. Compare explaining that the methods in a code base are too big and complex - some with Cyclomatic Complexities in 100s! - verses explaining that the methods in a code base cost 2.5 months of development time every year. The latter is much more visceral. The former sounds academic - the latter sounds expensive. It’s indispensable data when talking about legacy systems.