This is the second blog of a series of undetermined length about things NDepend told me about a personal project of mine. The first post describing the project (an object-object mapper) and the first change I made is here.

So last time NDepend told me about an abstract class I had which had an internal constructor - cool :) I next looked at a claimed 40 methods which are never called - this is the screen opened from the Dashboard describing the methods: 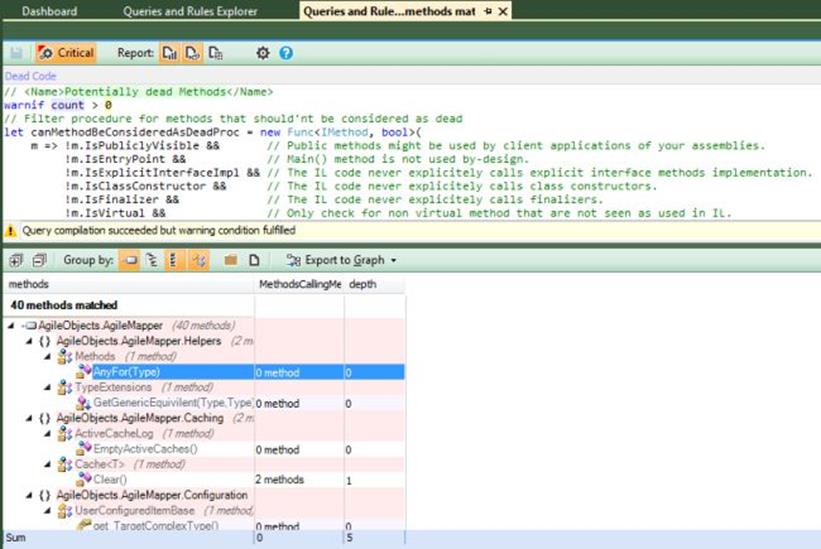 It’s the same set up as last time - the Linq query and an explanation of the rule are at the top, the results are at the bottom. After clearing out a few methods which sure enough were never called, I got to the Clear() method: 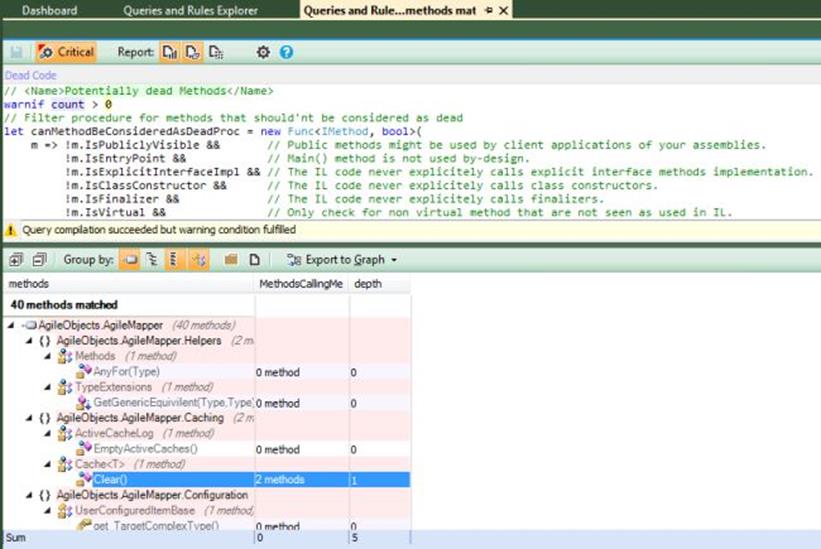 …which the report says is called by two other methods. So why is it included? I turned to ReSharper to find where it’s called: 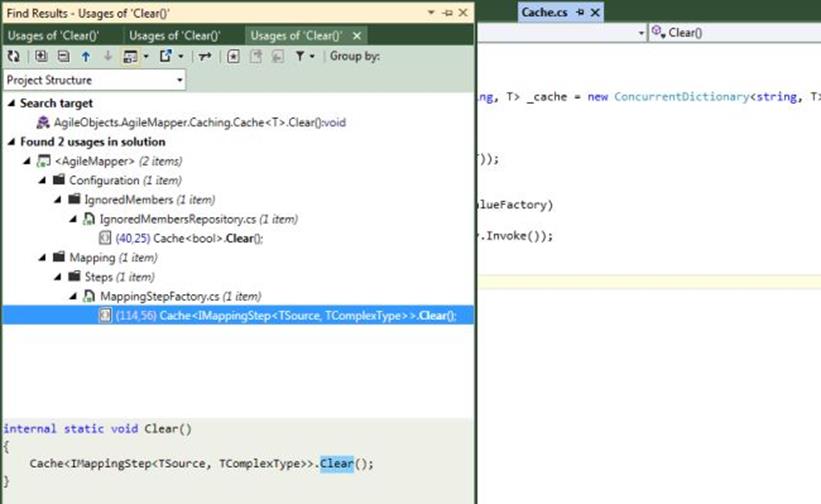 …and yep - it’s called in two places. Let’s look at the NDepend Linq query to see if there’s a clue there as to why Clear() has been included: 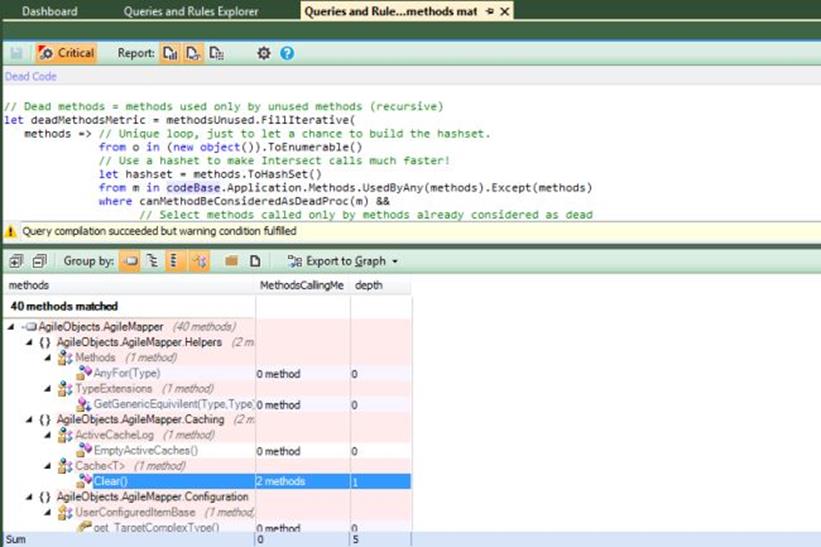 This is where the way I set up the report might have bitten me a bit. I have a project for the mapper and a project for the tests, but I didn’t include the test project in the analysis because I’m most interested in the mapper project. To avoid having to work out what and how to map all the time, the mapper does quite a lot of caching - but I want my tests to be isolated, so that’s where methods to clear the Cache come in. In other words the uncalled methods which call Cache.Clear() are called, but only by the test project, which I didn’t tell NDepend about. So nothing to delete there. 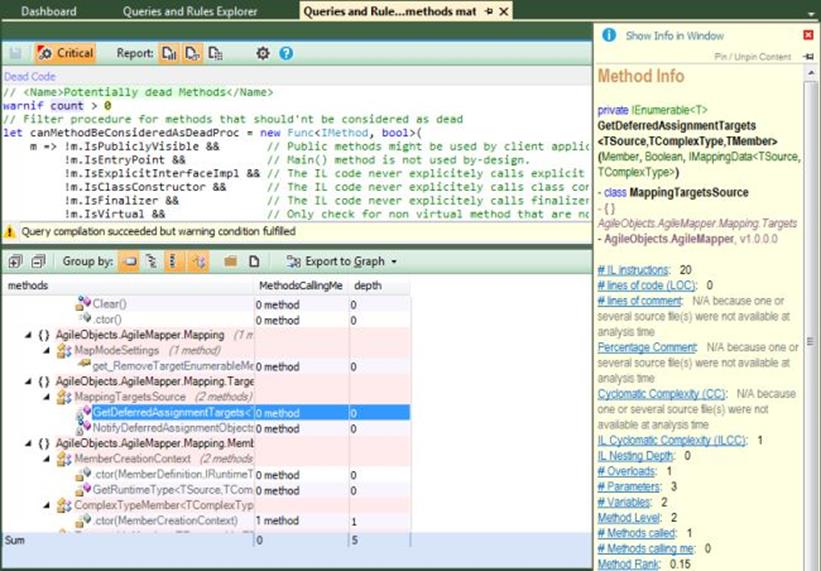 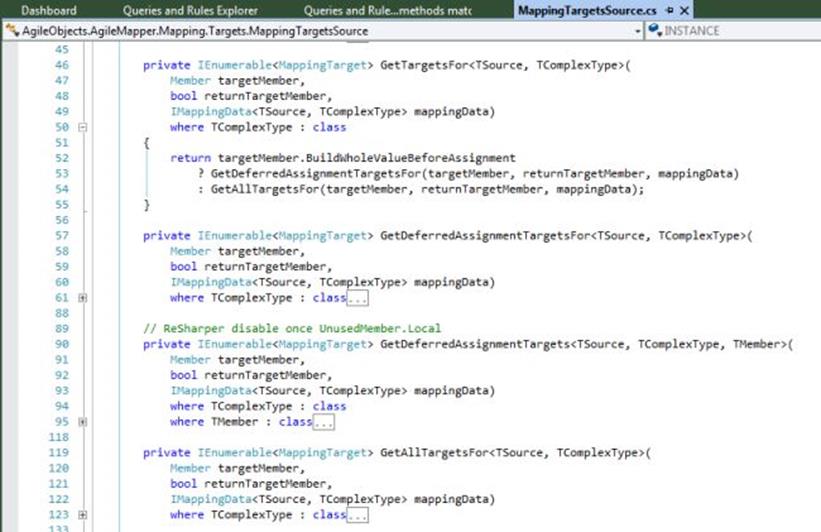 Ahh, ok - I’ve already told ReSharper not to worry about this one - it’s called via reflection. This is a perfectly understandable shortcoming of both ReSharper and NDepend, so nothing to delete here either - the Linq query will actually ignore methods marked with a particular attribute, so I can exclude this one from the analysis. Next one:

Apparently the constructor of MappingStepActivityDescription is never called. Well, it turned out that class actually didn’t have a constructor, but all its methods were static, so I was able to make the class static too:

All the methods in the report fell into those categories - never called, only called from the test project, only called via reflection, or classes which could be made static. I got to trim out a reasonable amount of unused code, with all my tests passing to let me know I hadn’t broken anything. Good stuff!

I next looked at the next Critical Rule violation, which was an Exception not named with ‘Exception’ on the end. I’ll write about that next time.