Targeting .NET Standard was… non-trivial. Y’see, while .NET Core is at RTM, the tools for Visual Studio 2015 are still in preview. I thought maybe Visual Studio 15 might work, so I got Preview 5 aaaaaaand…

…computer said no. Oh well - using the Dapper and AutoMapper codebases as examples to help me along the way, here’s how I added the support using VS2015 Update 3.

xproj may not be here to stay (boooooooo), but if you want to cross-compile a library - build one assembly for, e.g. .NET Standard 1.0 and .NET 4.0 - this is currently how it’s done.

So! I removed the old, out-dated Class Library project:

…and added a new, sparkly .NET Core one:

…naming the new project something different to the old csproj library of course, because that still existed on disk. Next, I removed the new project:

…and headed to windows explorer where I renamed it to match the old csproj, and moved it and its project.json into the original csproj folder. Then I re-added it to the solution, giving me this: 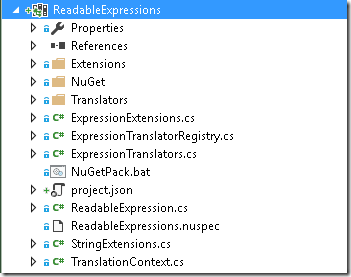 Because of the wonder of xproj, the folder contents all show up without having to manually add them. Hurrah!

project.json is also apparently not here to stay (boooooooo x2), but again - this is how it’s currently done.

You may notice I moved the NETStandard.Library dependency into the dependencies section for the netstandard1.0 target - that’s not necessary, I just did it as a kind of OCD thing, because that’s the only target that requires that library.

I defined the conditional compilation symbol NET_STANDARD so the code could distinguish between its .NET Standard1.0 and .NET 4.0 versions - more on that later - and manually updated the version number. In a csproj I can link to a shared version number file, but as far as I can tell the way NuGet packages are produced for .NET Core requires the version number to be in the project.json. Shame.

With these changes made to the project.json, I started getting errors about the DynamicExpression class not being supported:

There’s a couple of things to note in that screenshot:

I removed this code from the .NET Standard version by wrapping the whole class with #if !NET_STANDARD / #endif - where NET_STANDARD is the conditional compilation symbol I defined in the project.json - and compiled again*. Here’s where I ran into problems with the changes to the reflection API:

Some of them were resolved by adding a reference to System.Reflection.TypeExtensions:

…and this was one example of the tools being in preview really biting - manually editing the dependencies section of the project.json caused VS to freeze for 10-15 seconds while it tried to resolve the package - even though the file hadn’t been saved and I haven’t finished typing. I ended up typing package references into Notepad and pasting them into project.json or using the NuGet package manager instead.

The rest of the ‘you can’t do that in .NETStandard1.0’ errors I fixed with polyfills, as per a recent Jeremy D Miller blog. For example:

After updating the code to use the polyfills, the project built again. Progress!

My unit tests project referenced the old csproj, but that was now gone. They couldn’t reference the new xproj, because csproj -> xproj project references don’t work, so I added a new ReadableExpression.Net40 csproj project, and replaced the ItemGroup listing the included files with:

…which included links to the CommonAssemblyInfo and VersionInfo files and all the .cs files from the original project - I could then reference that from the unit tests project, and my tests were wired back in. They all passed! Magic!

NuGet packages are created from xproj / project.json projects using the dotnet pack command. This doesn’t use the .nuspec file that NuGet.exe does, so I added the old package information into the project.json. dotnet pack also uses the name of the project’s folder for the output assembly name, so I had to specify that in project.json’s buildOptions. The final project.json can be seen on GitHub here.

Testing (some of) the Polyfills

So far so not-so-bad, but my .NET 4.0 unit tests only test the else branches in the #if NET_STANDARD forks - not the .NET Standard paths. Most of the polyfills were very simple like IsClass above, but a few were more involved, and I wasn’t comfortable leaving them untested. I followed the instructions in this article to add a new .NET Core Class library with a project.json pulling in MSTest - added a test class, and the references came through fine! Great!

Next, I added the ReadableExpressions project reference, giving me a frameworks section which looked like this:

And that… didn’t work. The package restore completed, but I had the following build errors:

The classes under test are internal, so I added an InternalsVisibleToAttribute to the project… and it built! But… looking like this:

…still saying the classes under test weren’t accessible, ‘The dependency ReadableExpressions could not be resolved’ and ‘The given key was not present in the dictionary’. The tests didn’t show up in Test Explorer. The project looked like this: 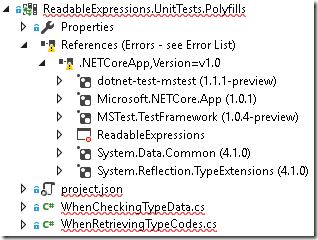 A bit more research led me to global.json, where you can list the folders in which the projects in your solution exist, so other .NET Core projects can reference them. Like this:

That must have been it! But… the error list still looked the same. I unloaded the project and reloaded it, and finally!

It still claimed (and continues to claim) an error in the references, but the error list now only stated ‘The given key was not present in the dictionary’ - it built, and nothing had a red underline.

So, final thing… actually running the tests. The Test Explorer didn’t find them, ReSharper found them but couldn’t run them… so I went to dotnet test. And that worked:

At last! Not perfect, but… good enough. Maybe all this trial and error will help someone else get to the result more quickly :)

* In the course of writing this blog I discovered I can get DynamicExpression back by referencing the System.Dynamic.Runtime package - I’ll make that change at some point.