I recently finished a small website using ASP.NET Core and MVC 6 - I only scratched the surface of the framework, but here’s some gotchas and things I picked up along the way. If you’re entirely unfamiliar with ASP.NET Core and MVC 6, it might be a good idea to read up a bit on that first.

The default project.json contains the following:

…defining folders to ignore when publishing the project. “Well” I thought, “I’m not using node, so I can clean that up a bit”:

That’s better! Admittedly only OCD-better, but that still counts :p No point excluding the node_modules folder if there isn’t going to be one, right?

Well, once I started using Gulp for CSS minification my project wouldn’t build! I got this:

“The design time host build failed with the following error:” - with no further error details. With diagnostic build output I found a ‘path too long’ error as detailed here, and through that bug report I [eventually] figured out that the path in question waaaaaas… node_modules. Gulp had added node files in that directory and the compilation process was falling over when they were included in the build. Adding node_modules back into the exclude setting fixed it, but that took an annoying amount of time to figure out.

I usually use StructureMap for DI, so I’m used to injecting concrete types into constructors without having to think about it. ASP.NET Core comes with its own built-in DI container, but it doesn’t support concrete dependencies without them being configured. Like this!

…hardly a chore, but this was a very simple application. On anything of significant complexity I’ll use StructureMap instead of the baked-in container.

The normal MVC /controller/action routing didn’t work right out of the box (not that it usually does) so I added attribute-based routing like this:

…and that worked fine. But seeing as all my attributes were doing was setting up the default routes, I switched to setting up a default route in StartUp.Configure(), like this:

…but that didn’t work. What? I changed it to the built-in default route method:

…and that didn’t work either. I put the attributes back on, it worked. I removed them, it didn’t. Eventually through some magical incantation of removing and re-adding route configuration - switching it off and back on again in other words - UseMvcWithDefaultRoute() worked without routing attributes. Not sure what happened there.

package.json is the configuration file used by Bower to manage dependencies Node.js needs to perform Gulp’s client-side tasks (see the comments for clarification of this). As an aside I have a knee-jerk reaction against using different package managers for client- and server-side packages, but as client-side package management is already a task performed well by Bower, there’s sense in using it instead of NuGet for that… I guess?

Anyway, package.json does not appear in Solution Explorer: 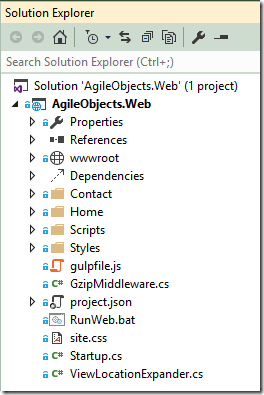 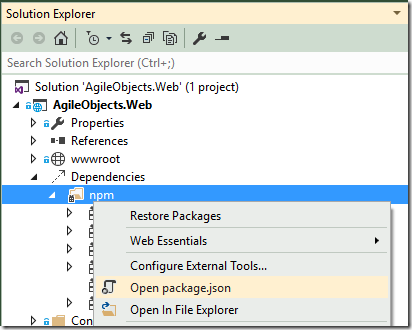 …that wasn’t terribly intuitive to me given that project.json (which contains the server-side dependencies) appears in Solution Explorer just fine. You can actually make package.json appear by removing the following line from your xproj file:

…and I suspect doing so has no negative side-effects, but I don’t know for sure, so I didn’t bother.

Tag helpers are a less obtrusive alternative to MVC 5’s many Html.Blah() helper methods, and IMO give you much cleaner view markup:

You can read more about them at the link above, but I found adding attributes to standard markup much nicer than using the helper methods.

…and values are automagically pulled from Azure settings if they exist. Adding the Startup.Configuration property instance to the built-in DI container like this:

…makes IConfiguration accessible as an injected dependency, like this:

…which saves you the task of abstracting your configuration - something I’m used to having to do. Neat! :)

I prefer to group project content by feature instead of in folders named Controllers, Models and Views, but doing that in MVC 5 means you have to tell the framework where to find controllers. Not so in MVC 6, which finds them wherever they are without fuss. Nice! The same unfortunately isn’t true of Views, but it’s pretty easy to re-configure:

…you simply return an enumerable of strings containing possible View locations. That’s it!

Overall I really enjoyed working with ASP.NET Core and MVC 6, and I look forward to putting it to work on a more complex project in future.