My current pet project is a chess-type board game using Node, Angular and TypeScript. This is my first time working with Node or Angular and the differences in the way they approach Dependency Injection - along with a recent blog by Cellfish - led to this post.

First, a refresher on what Dependency Injection is. Any non-trivial, non-throwaway application is split into components, each of which handles part of an overall task. There are various ways a component can access the other components it needs:

I’ve come across the first setup more than once (usually accompanied by an AnemicDomainModel) and because everything’s hard-wired together, it’s difficult to test. Frameworks exist which let you interrupt and re-route static method calls (through IL-rewriting black magic), but that’s really just nice-to-know in case you find yourself with no other option. It looks like this:

…and it’s not Dependency Injection. The second setup comes with the option of doing proper DI, for example:

FooService here gets its instance of BarOperations through Bastard Injection - you can side-step injecting it through the constructor via the parameterless constructor, which creates a new instance all by itself. This may seem convenient, but it’s just as hard-wired as the first example, which gives you all the same problems. Hence the slight and subtle pejorative in the name :) This is not Dependency Injection.

The third setup has a bad rep, but I think there’s an example of it which isn’t as bad. It looks like this:

So. FooService here is using a service locator as in the frowned-upon Service Locator Pattern - it has a static reference to a service location class which it asks for its BarOperations instance. The problem with this is that the relationship between FooService and BarOperations is hidden - there’s no way for clients of the FooService class (other classes / people writing code against it / people writing tests against it) to know that it depends on BarOperations and to therefore know they need to deal with that dependency up-front; that’s why Service Locator is considered an anti-pattern.

LaLaLaHelper is also using a Service Locator, but I don’t think in quite such an unhelpful way. It declares via its constructor that it requires an IServiceLocator implementation in order to do its job - that is, it requires the ability to arbitrarily obtain instances of any class it chooses as and when it needs them. There are examples of this in proper grown-up code like MVC’s IDependencyResolver

And so finally onto Dependency Injection done properly:

…there. FooService uses its constructor to declare its dependencies, and we can create a BarOperations instance however we choose and hand it over. This is Dependency Injection.

And so to DI in Angular. The following TypeScript declares a controller object and registers it with Angular:

Node uses Asynchronous Module Definition (no it doesn’t! See the comments), which you use by calling a require function to obtain your dependencies. Hopefully the following example is self-explanatory:

Let’s review the types of DI we’ve got here:

This is an abbreviation of some code from the Node entry-point class for my game, but I hope sometime soon it won’t look like this. It… isn’t pretty. It’s not Dependency Injection. I’ve found some discussion about Node’s DI approach, and there were some interesting comments: 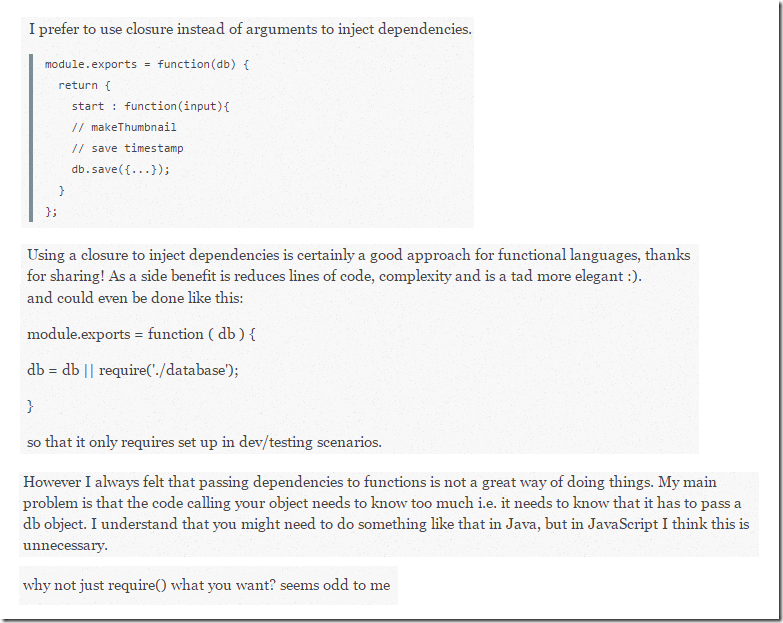 …the first comment is advocating what is essentially constructor injection as an alternative to the parameter injection originally set out in the blog - that’s warm and fuzzy, I agree with and like that. The second comment advocates Bastard Injection “so that it only requires set up in dev/test”, but I’ve only ever seen problems result from having setup differ between environments, so I’m not sure of the benefit. The third comment advocates different practices between Java and JavaScript, but I’d say these principles - inversion of control and discoverable dependencies - are language-agnostic, so I don’t follow the logic. The fourth comment (originally made on a blog about DI in Angular) questions what’s wrong with just using require like Node does as standard - the answer is service location and hidden dependencies.

It seems odd to me that this is Node’s standard way of dealing with dependencies - especially in light of the way it’s done in Angular - but there’s what looks like a good Node DI package available so I’m going to give that a go. Fingers crossed I’ll be able to make my server-side JavaScript as composable as the client-side stuff. If not… I’ll just cry or something, I dunno.